A1GP: Desperate day for Britain, but Carroll and Khan shine

A mystery mechanical fault and a controversial clash with the American car meant that Team GBR failed to finish either of A1GP’s New Zealand races and now drop to eighth in the championship.

The field on the Taupo grid

By contrast, Ireland scored a pair of solid points finishes and move up to sixth, while Adam Khan responded to the coaching of former British team member Danny Watts to take Pakistan’s first point of the season.

Home nation New Zealand now leads the championship after Jonny Reid piloted ‘Black Beauty’ to a win in the sprint race and fourth in the feature, behind race-winner Christian Vietoris of Germany. Previous championship leaders Switzerland had a day to rival Britain’s, failing to get past the first corner of the sprint and being pushed back to 14th in the feature by penalties.

Britain’s Robbie Kerr made a fine start to the sprint race from 13th and was soon challenging the USA’s Jonathan Summerton for seventh place. However on lap five the cars clashed and Kerr was shunted off the circuit. 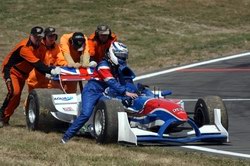 A bad day for Robbie Kerr

He managed to manhandle the car back to the pits and came out again at the end of the race, to be eventually classified as finishing 20th, five laps back from the winner.

The fifth lap proved fatal to his feature race challenge, too, when he was forced to retire from eighth place as a lurking mechanical problem that had put the team on tenterhooks before the race sent the oil temperature spiralling and killed the power to the engine.

Team boss Katie Clements was left gloomy by events: “It’s been an extremely disappointing day. Robbie did well to avoid the collision at the start of the sprint race, gained five places, and from then on he was determined to move forward but unfortunately USA shunted us, putting us out of contention.

“We’re still looking into the engine problems that caused us to pull out of the feature race, but hopefully everything will be resolved and GBR will be back racing at the front of the pack in Australia where we belong.”

Kerr was adamant that the incident with Summerton had been the American’s fault – although the US driver took the opposite view.

Kerr said: “I passed the car halfway through the previous corner, I was alongside him for the full length of the straight. I was in a perfectly straight line. I believe I left him more than enough room on the outside.

“I was about to turn and I got hit from behind in my left sidepod. It sent me skywards. From my point of view, I had the corner and I gave him enough room.”

The American version was a little different. Summerton, apparently forgetting that motor racing involves a competitive aspect, said: “I drove in a straight line and I braked at my normal point. He just decided he wanted my line too. You can ask many people and I think a lot of people will agree with me. It wasn’t really my fault.” 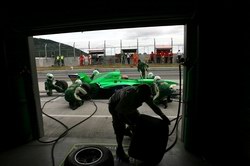 If Team GBR went away grumbling, Ireland left Taupo with the sense of a job well done after Adam Carroll took a fifth and a sixth place from his first visit to the circuit.

A relatively uneventful sprint race saw him grab sixth place off Summerton at the start and hold it for the entire race. His greater challenge was always going to be the feature race where he had qualified only 13th.

The job got harder after a first-lap contact with Summerton damaged his front wing and sent him into the pits. He emerged in last place, but still in contention thanks to a safety car period.

From there a combination of bold driving, sharp race strategy and efficient pit work allowed him to carve his way through the field until a Swiss penalty on lap 41 handed him fifth place. He crossed the line just four seconds off the lead.

Race engineer Dan Walmsley said: “We were happy with P6 in the sprint race, but we all knew the real challenge was to come in the feature race. We had good pace but unfortunately got tangled up in an incident which damaged the front wing so we were forced to pit for a new nose.

“The boys did one of the fastest nose changes we’ve ever seen though and a lap later, when the safety car came out, we managed to catch back onto the pack only four laps from the pit stop window.

“We recognised we had the pace so stayed out six laps into the second pit window. This was the most crucial part of the race for us as Adam was blisteringly quick on old tyres and that helped us leapfrog four cars.” 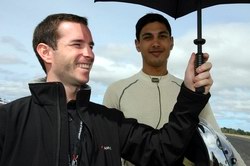 Adam Khan gave much credit for his improvement to Danny Watts

Pakistan’s Yorkshire-born driver Adam Khan had suffered through a dire qualifying day to start on the back row of both races – but he put in the performances when it counted to twice cross the line in 11th place.

And a post-race penalty for the USA dropped them out of the feature race points, promoting Pakistan to 10th and scoring them their first point of the season.

In the sprint race he gained a couple of early places and benefited from a midfield collision to rise to 15th by the time the safety car came out. After the restart he took Indonesia for 14th and then climbed to 11th by race end.

He made an early impact on the feature race, climbing halfway up the field to reach 11th by the first pit stops. A tussle with Neel Jani in the Swiss car sent him onto the grass and back into 15th, but he regained the places to cross the line 11th and ready to benefit when the USA was penalised for a mistimed pit stop.

Afterwards Khan said, with forgiveable optimism: “It was a good step forward; the team is gelling well, the car is good, and moving up half the field – if we can keep this momentum going, a podium will soon be in our sights.”

Both were quick to highlight the impact of Danny Watts, who joined up with Pakistan as driver coach after previously serving as the Team GBR rookie driver.

Allen said his “excellent work” had given the young Khan extra confidence, while Khan himself said: “He was very beneficial during the race as well, feeding me valuable information throughout, motivating me and sharing his racing experience, so that really helped.”

From New Zealand, the A1GP series crosses the Tasman Sea to Australia for the next race, which takes place on February 2nd at the Eastern Creek Circuit in Sydney.

All photos reproduced courtesy of A1GP.

Previous: A1GP: Brits falter in NZ qualifying
Next: A1GP: Kerr on the podium in Australia