A1GP: Kerr on the podium in Australia

A1GP, Archive
Home > News > Our blog > A1GP: Kerr on the podium in Australia

Robbie Kerr put Team GBR on the podium at a rain-soaked Eastern Creek Circuit, ending a run of British bad luck that had stretched back to the previous race in New Zealand. 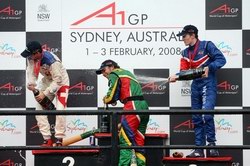 Robbie Kerr on the podium in Australia

Kerr’s third place in the feature race, behind winner Adrian Zaugg of South Africa and Switzerland’s Neel Jani, meant that the Brits come away from Australia in sixth place in the the championship.

New Zealand and France are tied at the top of the championships, following a French victory in the sprint race, while the Swiss are just a few points behind them going into the next race in South Africa on February 24th.

Team GBR had suffered a torrid time in Taupo, New Zealand, but saw hope for the Australian races when Robbie Kerr qualified eighth for the sprint and third for the feature race.

However, the start of the race weekend was marred for them by a freak accident suffered by Kerr’s race engineer James Goodfield, whose leg was broken after being hit by a tyre hose gun that became disconnected when the Portuguese crew in the next door garage were practicing their pit stops.

And the sprint went wrong after the team reacted to rain late in the race by pitting for wet tyres – most of the rest of the field stayed out on slicks and Kerr was unable to make up the lost places, finishing 16th despite running in fourth before the rain came. 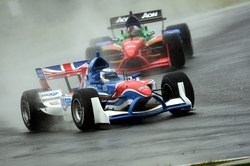 Kerr races in the Australian rain

But the feature race, held entirely in the rain, was a different matter. Although he was unable to capitalise on the free place gained by polesitter New Zealand starting from the pitlane, Kerr nevertheless turned his third on the grid into third at the flag in a relatively untroubled race.

And just for good measure team rookie James Winslow, no wet-behind-the-ears beginner despite his official status with the team, scored a pair of podiums in the Australian F3 Championship races that formed part of the weekend.

Team Principal Katie Clements said: “To celebrate the podium following the morning’s disappointment is really fantastic. Robbie did an extremely good job in very difficult track conditions and I am pleased that, after the misfortune in New Zealand a fortnight ago, we are able to leave Australia with some good points and having moved up to sixth in the championship.”

But if GBR was celebrating some success, Adam Carroll and Team Ireland were mourning their worst performance this season – only once before had the Irish failed to score points in a race but this time they drew a blank in both.

Carroll was labouring in the midfield for much of the sprint race but when the rain hit he was able to work his way up to fifth. However, his challenge was derailed by a tussle with the Canadian car that left him spinning in the wet and he was only able to salvage 15th place.

In the feature race he was beaten before he started: the team gambled on the rain stopping, sending him out on slick tyres and with a dry set-up, but the weather refused to cooperate and he had to pit after the parade lap to change them. He emerged in 21st and managed to work his way up to 13th by the end of the race. 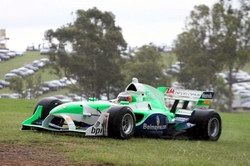 Carroll: “I threw away some easy points”

Carroll said: “I threw away some easy points in the sprint. I was fighting hard for a position so was too tight on the inside of the corner and there was no grip there. When I put the power down there was a bit of grip but then it was gone and it just caught me out.

“In the feature we made the wrong choice of tyres on the grid. We thought it would dry out so started the race on slicks but as the rain fell on the parade lap we decided the best thing to do was to come immediately and stick wets back on, which was the right thing to do. But we didn’t have a wet set up so we didn’t have any grip.”

Team Principal Mark Gallagher concluded: “We’ve been a model of consistency, scoring points every weekend this season. I think inevitably we had to have one that didn’t work out for us and this has been it.

“This is one to park up as being a tough weekend and we now look forward to getting back to our consistent points scoring success for the balance of the season and continue to look for that elusive victory.” 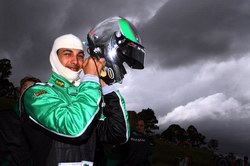 One place ahead of Carroll in the feature race was Pakistan’s Yorkshire-born driver Adam Khan, who paired his encouraging 12th place with a mistake that forced him out of the sprint race.

Fighting for position with Team Lebanon at the beginning of the sprint, he ran wide on the first turn of lap two and hit the wall. “I got a little too close to the car in front and had to lift off suddenly which put me into a spin and that was it – race over,” he said later.

In the feature race he took full advantage of the wet conditions to gain places – but was pulled in for a drive-through penalty after being judged to have made a jump start. The penalty may well have cost him the team’s second points finish of the season.

Driver coach and former Team GBR member Danny Watts said: “Adam made an early mistake in the sprint race – from watching the TV it seemed he just dropped a wheel over the kerb onto the earth at the first corner. There’s no grip there and that just spun him round and he clipped the wall.

“He made up for it in the feature race though – he was quick, he showed genuine pace and was consistently lapping in the top ten. Adam is very talented in the wet, and it’s a shame that we had the drive-through penalty.

“This was the best race he’s had so far this year; overtaking people, he made cars such as Ireland and Malaysia look really slow. I’m very pleased with him.”

His view of the fast-improving Khan was shared by team manager John Allen: “Adam drove a fantastic feature race. P12, especially as we had a drive through, is a fantastic result. He has the pace to be in the top ten, we know what we are capable of that now, we just need to build on it.”