A1GP: get the low-down on a Team GB pitstop

Ever wanted to know more about what happens during a pitstop? Well now’s your chance, thanks to a TV appearance about to be made by A1GP’s Team Great Britain.

The team’s pit lane skills are to be highlighted in a Channel Five programme next week. How do they do it? aims to explain the science behind everyday events and objects and will tell the story of the pit stop crew. 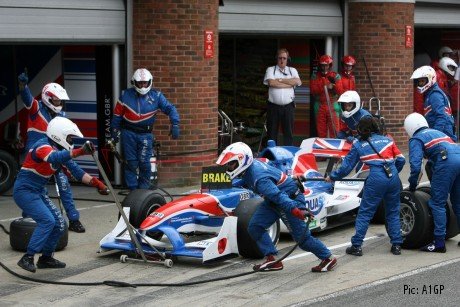 The programme is set to reveal exactly how they manage to change four tyres in less than ten seconds as well as the strategy involved in pit stops.

The show’s presenter Robert Llewellyn is also an old friend to those of us who are what you might call geeks of a certain age. Gosh, he must be sick of that whole subject by now, mustn’t he?

Anyway. Robert Llewellyn joined A1 Team GBR at the team’s home race at Brands Hatch earlier this month to discover how the race team performs pit stops and the tactics and strategies involved in selecting the optimum time for a stop.

During his day with the team Robert got to know team manager Paul Bellringer, race engineer James Goodfield and driver Robbie Kerr.

He had the opportunity to try out all the various pit stop duties, including tyre changes, lollipop and operating the jack. He was able to listen in on the team radio during free practice, and joined the team in the garage in an extremely tense qualifying session which saw the team take pole for the sprint race and second place for the feature race.

Although there is no requirement for a pit stop in the A1GP World Cup of Motorsport sprint race, each driver must pit twice in the feature race.

The first stop must take place between laps eight and 20, with the second pit stop window announced when the pit lane opens for the race. A maximum of seven mechanics are permitted to change all four wheels and tyres.

The team points out that pit stops not only need to be quick but also strategically planned for the perfect point in the race. The team need to work out exactly when the best time is to pit – depending on the strategy of competitors and traffic on the track.

As the pit lane is a busy, confined area a pit lane speed limit is enforced. A driver will press the pit limiter as the car crosses a line at the entry of the pit lane, which will quickly bring the car down to a speed of 60km/h.

If a car exceeds the speed limit the team will be fined and the driver will incur a drive-through penalty. Pit stops therefore, make up an integral part of the race strategy.

To get details of how to watch the programme, and learn even more about the procedure than is written above, click here.

Demelza House provides hospice care for more than 450 children with life-limiting conditions and their families across Kent, East Sussex and South London.

And fans who’d like to help fund this cause can bid in an eBay charity auction for team memorabilia. Loot on offer includes the race suit worn by Robbie Kerr when he took the Sprint race victory at Brands Hatch earlier this month and the podium backdrop he stood in front of when receiving his gold medal.

Both items will be personally signed by Robbie Kerr with the name of the winner. Bidding will close on Friday 6 June at 12 noon.For more information, visit the Team GB website.

Previous: IRL: Wilson aims for one better at Milwaukee
Next: A1GP: Q&A with Adam Carroll