IRL: Another practice smash for Wheldon

For the second race in a row, Dan Wheldon was forced to qualify in the spare Target Chip Ganassi racing car after an accident during practice – this time because a spinning car collected his as it crashed.

Last race, in Texas, a mechanical failure sent Wheldon into the barrier, injuring his foot, and then tumbling across the infield grass. This time, the impact was gentler – although it had the same result in totalling his race car.

The Englishman was running behind Dale Coyne Racing’s Bruno Junqueira when the Brazilian lost control. “It was just unfortunate,” said Wheldon, who was third-fastest at the time of the incident. “I was right behind Bruno and he spun right in front of me.”

Once again the spare car was dusted off for Wheldon while the less well resourced Junqueira will join Marty Roth, who also suffered a terminal failure of his race car, in watching from the sidelines.

Wheldon and Team Penske’s Ryan Briscoe were the only two cars to set four-lap qualifying averages before the session was yellow-flagged for weather as rain and gusting winds hit the Iowa Speedway.

With no improvement likely, qualifying was cancelled and the starting line-up decided by standings in the overall championships. That means Scott Dixon starts on pole, with Helio Castroneves second. Wheldon and Tony Kanaan make up the second row, with Briscoe and Danica Patrick behind them. Darren Manning and Justin Wilson start side-by-side on row 10. 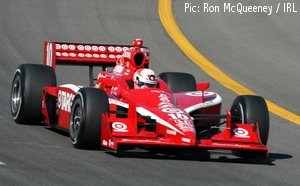