It’s the Spanish Grand Prix weekend – and the launch of the FIA’s much-anticipated anti-racism campaign, announced after British driver Lewis Hamilton suffered racist abuse from fans at the circuit during testing in February.

While we’re all hoping that the main action will be taking place on the track, this attempt to stop motor racing being plagued by the same kinds of problems that have afflicted, for example, football is very welcome.

The Every Race campaign was launched on Thursday at the Circuit de Catalunya, apparently in an extremely low-key fashion, basically featuring a press release being handed out in the paddock.

Spanish drivers Fernando Alonso and Pedro de la Rosa are notable for their absence among those quoted in support of the campaign, although Alonso’s portrait does appear on the website.

Sporting Life reports that both were reluctant to talk about the issue in an early press conference, and that both claimed that they were unaware of the existence of the campaign. (This is despite Alonso having had his picture taken for it, remember.)

He is reported as saying: “This weekend it will be okay and it will always be okay here. Everybody will be able to see that.”

De la Rosa reportedly added: “We’ve never had any problems here before and we will never have [them again]. Wait and see.” Read full story here…

Hamilton says that he has put the February incident behind him, and is looking forward to proving this weekend that his McLaren can compete with the Ferraris of Kimi Raikkonen and Felipe Massa.

He told the BBC: “The Circuit de Catalunya is a great track, there are so many enthusiastic fans which makes for a great atmosphere.”

“I believe that motor sport, like all other sports, is about freedom of expression in the pursuit of competition and excellence. Nothing more, nothing less” – Lewis Hamilton 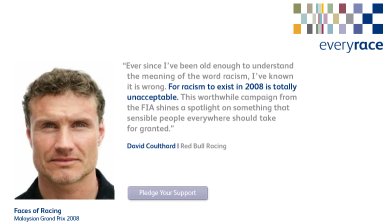 The campaign website (pictured above) has drawn some comment from F1 fans for its somewhat sparse content and lack of interactivity – but it’s early days and no doubt expansion is planned. Everybody seems to be quite willing to give it the benefit of the doubt at the moment.

Here’s what the FIA has to say: “The FIA and the RFEA [Spanish motorsport federation] are committed to the principle of sport open to all. In order to further promote this fundamental principle the FIA has launched the EveryRace campaign.

“With the support of the Formula One community the launch of the EveryRace campaign sends a message that discrimination and prejudice can have no place in sport or in society.

“The FIA would encourage motor sport fans throughout the world to visit www.everyrace.net and take the opportunity to pledge their support for the campaign’s message that motor sport welcomes everyone, irrespective of gender, race or background.”

â€œSince I started in motor racing I’ve worked with people from all over the world. We are all here to go racing and prejudice will never play any part in that.â€ Kimi RÃ¤ikkÃ¶nen, Ferrari

As part of the campaign the FIA commissioned award-winning photographer Darren Heath to shoot a series of portraits of members of the Formula One community.

According to the FIA, more than 50 representatives of F1 teams sat during the Malaysian Grand Prix weekend for what has become ‘Faces of Racing’ – a series of images that you can see on the campaign’s website.

It says: “As the campaign develops throughout this season and beyond, competitors from the FIA’s wide range of championships will be included in regularly updated versions of the â€˜Faces of Racing’ and â€˜Faces of Rallying’ portraits to create a montage genuinely representative of the international motor sport community.”

To pledge your support to the campaign, click here.

Previous: IRL: Patrick triumphs in Japan
Next: F1: Mosley will not attend Barcelona GP, but will be at Monaco