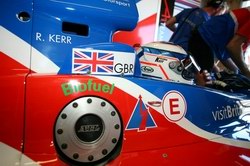 Robbie Kerr in the biofuelled GBR car at Taupo

Round five of the season takes place in New Zealand, where the green hills and Lake Taupo provide a picturesque backdrop for A1GP’s experiment with environmentally-friendly motorsport.

The day’s fastest lap was set by France’s Loic Duval, who sat out the rookie session in the morning then put in a 1m15.545s lap of the 3.5km circuit.

Ireland’s Adam Carroll still counts as a rookie, and set some impressive times in the morning session before posting the second-best lap overall in the afternoon.

The rookie session also saw the debut of James Winslow for Team GBR, but unfamiliarity with the circuit and a detailed technical programme to follow meant he finished down in the middle of the pack in 12th. It took Robbie Kerr, back in the car after Oliver Jarvis contested the previous races, to lift the Brits up the standings with sixth place in the second session.

Pakistan’s Adam Khan took part in the second session and was one of the slowest runners – only Indonesia set a worse time.

Pace-setter Duval was cautious about his achievement, warning that fastest on Friday was no guarantee of an eventual pole position. But he enjoyed the experience nevertheless: “For me this is the best country we go to, it’s really good here. It feels more like a holiday. I love the track, the people, the mentality, it’s just perfect to be here.” 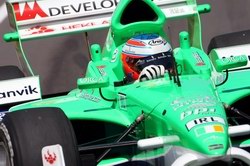 Ireland’s Carroll is also a fan of the Taupo circuit, despite some minor gripes. He said: “I like the track, although it’s quite bumpy through some of the faster corners. It was really busy out there as its quite a short circuit but there’s pretty good grip on the racing line and we got some good laps in. I’m very happy with what we’ve done and ready for the rest of the weekend.”

His race engineer, Dan Walmsley, sounded a note of caution based on the team’s experience at the previous race in China: “It’s crucial that we carry the momentum through to tomorrow’s qualifying sessions. We didn’t make the most of the good position we put ourselves in during practice in Zhuhai so it’s paramount that we capitalise on this tomorrow.

“The team is focused and we understand what we need to do, so there’s a really positive feeling that we can deliver a good result this weekend.”

British team boss Katie Clements was in a positive mood about final qualifying tomorrow, saying: “It’s been an encouraging start to GBR’s return to Taupo.” 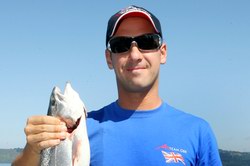 James Winslow relaxes before the weekend gets serious

She said: “James did a solid job in the rookie session, especially considering it was his debut both in the A1GP car and at Taupo, and obviously he has the honour of being the first Brit to drive the bio-fuel car for the team.

“We’re pleased with Robbie’s performance, and he proved to be immediately on the pace after his initial laps on the revised track. We know the direction we’re going in tomorrow and are feeling quietly confident ahead of qualifying.”

Kerr was pleased to be driving again, though he sounded disappointed not to have set a more competitive time: “We cannot complain about being sixth quickest in the practice session since I’ve been out of the car for over three months. We made a few changes during the session, which did help with performance, and I think we’re definitely looking good for the weekend. I’m sure with some other small changes, we’re going to find those few tenths that we’re after.”

Winslow, winner of the 2007 Formula Asia V6 by Renault series, spent most his session either learning the circuit or working on a programme which included an engine installation and bedding brakes. The team has confirmed he will return for the next race in Australia, where he has the advantage of knowing the track.

He said: “Considering it was my first time in the car, I was happy with how the session went and thought we had a good run, finishing only 1.3 seconds off the likes of Adam Carroll who have had podium finishes in A1GP.

“The main purpose of the session was obviously to get all the jobs ticked off the list, but I’m sure when I drive the car for a second time at Eastern Creek, we’ll be quicker in the rookie session”.

Winslow’s predecessor as British rookie, Danny Watts, was at Taupo under a different flag, having signed up to act as driver coach to Adam Khan of Team Pakistan. Khan no longer qualifies to take part in the rookie session, so he had to make his first acquaintance with the track during the second session while everyone else was running for speed. 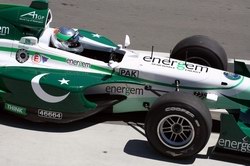 Adam Khan suffered from not knowing the Taupo circuit

He said: “It was a very slippery track, but I enjoyed my first experience here. We suffered from not having this morning’s session but I’m pretty sure we can do a good job this weekend.

“We need to look at the data, see where I need to improve and where to improve the car and go from there. The transition with the staffing has been very smooth. Everyone knows what they are doing and just got on with their jobs, it hasn’t been a problem and I’m very positive that we can make progress.”

Team Manager John Allen agreed: “I think we had a fair day today – we’re not that far off the pace.

“We had some problems in the tight braking areas with the car locking up, but I think that is a driving technique situation and we’ll work with Adam on that. Danny Watts has already established a good rapport with Adam, so this will help us to make progress as well.”