Unfortunately, he did – and what started as some good-natured joshing between friendly rivals became a bit of a PR blunder for the Hamilton family. 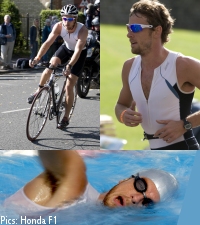 Thursday’s press conference with the three drivers was a friendly affair, with plenty of tributes to Coulthard who had just announced his forthcoming retirement. It was in that spirit of fun that Hamilton was asked by a journalist about his teasing of Button’s fitness.

That led Button to challenge him to take part in the Bath Triathlon on July 27th, egged on by Coulthard and the roomful of reporters. Hamilton was obviously torn between wanting to accept, and knowing he should concentrate on the world championship.

But an hour later, his father and manager Anthony Hamilton cancelled: “Lewis accepted the challenge like the good sport he is, and in the spirit with which he accepts things. Unfortunately for Lewis, we are withdrawing him from this. We are in the middle of a championship and that is the focus of our attention.”

The decision was not greeted favourably. “Lewis’s Dad hits the panic button” claimed the Daily Star, as commentators fed the decision into the growing ‘Hamilton is getting out of touch’ media narrative.

And Button – hopefully tongue in cheek – said: “That’s weak, very weak. Honestly, I’m surprised. He’s an athlete, I’m an athlete, we both love the challenge. What happens to the money now? Hopefully he still donates it.”

It was easy to see why the decision was made – disappointing though it was. The sensible solution, of course, would be to do it in the off season – or, better still, both enter the Mark Webber Pure Tasmania Challenge…

Anyway, here’s the full press conference exchange, sliced together from the FIA transcript:

Q: At the Reebok launch the other day you were quoted as saying you thought you were fitter than Jenson. Is that the case?

LH: I’ve noticed that Jenson has a bit of a belly and so… I’m only joking! I was just trying to be positive.

DC: Place your bets and go win the fight.

LH: Well, you’ve just done some event recently. What was that?

JB: It was a triathlon.

LH: Yeah, I’m not sure whether I could do a triathlon, so I’m not going to say that I could beat him at that, but generally I work my arse off… you work your arse off to be fitter than me, and you’ve got to believe that you’re fitter than me and the same way the other way.

JB: I do believe…

JB: I must admit, I do believe.

LH: It would be good to have a challenge.

JB: I’m sure we can work something out there. If you don’t like triathlons… The good thing is that you’ve got three different activities.

DC: Run a lap of the track.

JB: Exactly, we could try different things. I’ve got a triathlon on July 27th if you’re interested.

LH: Yeah? Well, shall we get this…

JB: We’ll get DC in there as well.

DC: I’ll be the referee.

LH: You can be the bottle-holder.

Q: So I think we’ve got the answer there: DC is going to be the referee and you two are going to do Bath, is that right?

LH: I’m not putting myself into it, I don’t know. I’ll probably be working or doing something else.

Q: Is this going to happen or not, guys? Come on! Yes or no?

LH: Well, me, I’m a competitor, so I’m for one to say yes, but I’ve got people behind me who may…

LH: Are you trying to steer me off this championship or what?

JB: It’s the only thing I can be competitive in at the moment. Think about it.

Q: Lewis, if you were to compete in a triathlon with Jenson, are you pretty adept at all three of the events?

LH: So, there’s swimming, cycling and running. How far do you have to go? What is it? Fill me in, fill me in.

LH: That’s not too bad. I was just checking my calendar, so I wasn’t being rude. I was trying to see whether I’m busy that day and unfortunately I don’t think I am. No, honestly, the biggest incentive is, if I do beat you, then you’ve got some money for a charity which is great. However, you do have an advantage as you’ve already done one, and I already know that by doing one you’re better the next time. But man, I’m up for it, I’m up for it.

JB: But then again, you have the advantage in a racing car at the moment, you’re in a better car so… It’s pretty even.

DC: Well, as you well know when I took you cycling and you puked up half way up the hill…

DC: No, but I’m talking about the training that you did. I’m 37-years old, for fuck’s sake. These are young kids.