F1: Hamilton’s new car is unveiled on his birthday

McLaren has unveiled its 2008 car – and, with it, the opportunity for Lewis Hamilton to come out fighting for the upcoming season.

The team held the launch at the Mercedes-Benz Museum in Stuttgart yesterday with all four of its drivers present. Lewis Hamilton was celebrating his 23rd birthday – and described the car as “the coolest birthday present you can get.”

Around 700 Mercedes-Benz employees from the company’s nearby plant attended the event, as well as more than 400 journalists and guests.

According to the team, “The car was completed yesterday (Sun Jan 6) and left the McLaren Technology Centre in the UK at around 18:00 GMT on Sunday.

“It was driven in a Mercedes-Benz Actros to the Mercedes-Benz Museum in Stuttgart-UntertÃ¼rkheim, having covered approximately 1000kms, arriving around 10 o’clock this morning.

“Following today’s event the car will be transported to the Circuito de Jerez in Southern Spain, where on Wednesday Heikki and Pedro will start the test programme with two MP4-23 chassis at a private test.

“The team will remain at the circuit for five track days, excluding the weekend. Lewis will drive the 2008 car for the first time on Thursday 10th January alongside Heikki.” 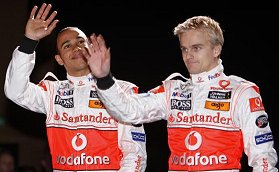 Hamilton said: “The Vodafone McLaren Mercedes MP4-23 is the coolest birthday present you can get, well, it is for me anyway! To see the car for the first time at such a great place as the Mercedes-Benz museum makes it an even more memorable day.

“I have had the past three weeks off and spent the time training and relaxing with family and friends. I know how much work has been going on in Woking, Brixworth and here in Stuttgart and it is a great-looking car.

“My engineer has told me that approximately 14,000 manufacturing man hours have been involved to produce the car in time for today. I will be testing it for the first time on Thursday.

“It is going to be a busy time but myself, Heikki, who I welcome as my new teammate, and everyone within the team is looking forward to it as we push forward together.”

Heikki Kovalainen added that he’d already had a chance to spend some time in Woking getting to know his new colleagues and was looking forward to starting work.

“I was able to learn a lot last year, and hope to take that knowledge into the 2008 season. I am looking forward to contributing to the development of the car during the six main tests in the build-up to Melbourne.

“It is a really exciting time for me to be joining Vodafone McLaren Mercedes.” 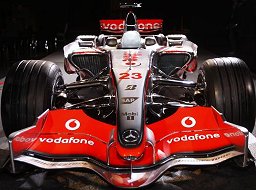 Ron Dennis emphasised that the team’s goal in 2008 would be to fight for both the drivers’ and constructors’ world championships, and to put the problems of 2007 behind them.

“We are looking forward to another competitive season as we look to build on the momentum of last year.

“Every single member of the team has worked extremely hard since the end of the 2007 season to get the MP4-23 on track as soon as possible, to ensure we have the maximum amount of testing time available before the cars leave for Australia.

“We are all extremely pleased to have the opportunity to launch our new car at the Mercedes-Benz museum in Stuttgart underlining the strength of our partnership.”

Martin Whitmarsh, McLaren CEO, added: “We are confident, based upon the simulation and analysis which has been an integral part of the development process, that the MP4-23 represents a step forward.

“Of course we will continue to develop the car from now until the first race in Australia and see whether we have done enough to be at the level where we want to compete this coming season.

“From today we have 68 working days until the Australian Grand Prix, and everybody within the team is highly motivated to travel to Melbourne with the most competitive package possible.”

Get karting at this year’s Autosport International
F1: Spa falters as crowds fail to flock to rural Belgium
F1: why is Donington still silent on debenture scheme?
F1: is this what we can expect from the BBC next year?